A hearty, delectable soup packed with fresh veggies, tasty meatballs, and a yummy broth that is sure to fill you up!

My History with Albondigas Mexican Soup

My first time making Albondigas Mexican Soup was in 2011. I remember it quite vividly actually. It was our first Cinco de Mayo in our home and I wanted to start making this a yearly tradition. I scoured the internet trying to find the best Albondigas recipe, bought all the ingredients, followed it exactly as it stated, and came out with a subpar meal. I was a little disappointed. Hubby of course ate it, but he could have waited another year to have it haha!

I’ve made Albondigas at least 10 more times since then. Always trying different recipes, tweaking them a ton, but nothing ever stood out. Until 2022. Yep! I finally perfected the Albondigas recipe i’ve been looking for for nearly a decade. Of course, this may not be the traditional Albondigas you might find in any Mexican restaurant, but this is pretty darn yummy if I do say so myself. But most importantly, this Albondigas Mexican Meatball Soup is something my husband raved about and is actually excited to have again soon!

I love a ton of fresh vegetables in my Albondigas and so do my kids, so use as little or as much as you’d like!

I’m a firm believer in using what you have on hand. While most soups or stews usually calls for bulk, large carrots to chop, I usually always have baby carrots in the fridge from my grocery hauls, so that’s what I use!

Personally, I like to saute my onions, carrots, and celery in extra virgin olive oil rather just adding it all cold to a pot and bringing the broth to a boil. I feel it helps keep the structure of the vegetables than making them mushy. But you do you, friend! Don’t have time for that? No worries, just throw it all in there.

In my variation of Albondigas Mexican Meatball Soup, I used 3 medium sized Russet Potatoes cut into about 1 inch pieces. Lots of recipes call for large chunks of potatoes, but I like them to be slightly smaller. I want the meatballs to be the standout in this dish, not the potatoes.

There are so many variations to make Albondigas, but my absolute favorite way to make them, are with ground beef (85% Lean/15% Fat) and a little bit of Mexican chorizo! The chorizo really helps bring a smoky element to the meatballs. Also, I like adding a little bit of long grain white rice to my meatball mixture. Lots of recipes call to throw it into the soup itself or to omit it entirely.

While it’s not necessary, I like to form my meatballs ahead of time and stick them into the fridge for at least 15-20 minutes before adding to my broth. I feel like they hold up better when they are cooking.

Absolutely! My two boys (9 and 6) ate this up so quick! My daughter (1.5) had the meatballs cut up along with several pieces of the vegetables on her plate and she gobbled it up.

If you end up making this, please leave me a comment and let me know what you think! Or if you modified it to make it your own, i’d love to hear what you did!

Pin it for later! 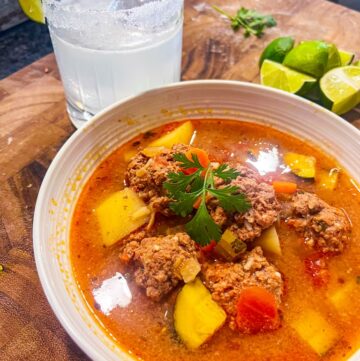 If you’re in a time crunch, you can certainly skip refrigerating the meatballs, and rather, make and form the meatballs while the veggies and broth are coming up to a simmer (step 3 of making the soup).